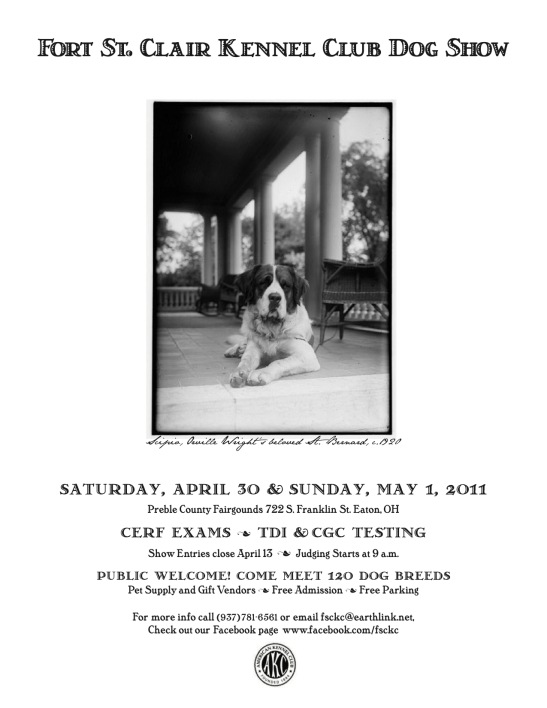 Each year at Fort St. Clair Kennel Club, our show has a special “show logo” and poster featuring a famous Ohio native and their beloved dog. We started this in 2011, with Orville Wright (Dayton) and his St. Bernard, Scipio. As it happens, we know a quite a bit about Scipio– he came to Ohio by train as a puppy, from Nina Dodd’s White Star Kennel in Long Branch NJ. Mrs. Dodd was a very prominent breeder of quality St. Bernard’s in her day and a frequent exhibitor at AKC shows and Westminster. Orville paid $75 for Scipio– the equivalent today is around $1400. Orville bought the dog in 1917, and Scipio died in 1924. When Orville himself died in 1948, he still had a photo of Orville in his wallet. 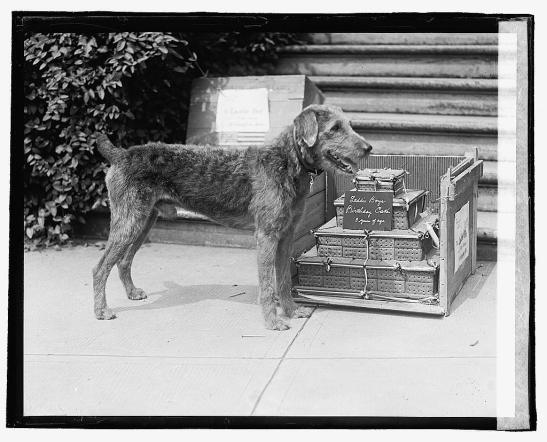 In 2012, our pair was President Warren G. Harding (Blooming Grove, near Marion, OH) and his airedale, Laddie Boy.  Despite the scandals surrounding President Harding, Laddie Boy was enormously popular with the press and the American public. He came from Caswell Kennel in Toledo, OH and was a frequent presence at cabinet meetings and other state occasions. When Harding died, Laddie Boy pined at length– and when Laddie Boy died, newsboys collected pennies which were melted into a sculpture the likeness of Laddie which is today in the Smithsonian Institution. President Benjamin Harrison (North Bend, OH) and his granddaughter and his pointer, Jack, graced our 2013 show materials. There was not much to be found about President Harrison’s dogs, other than what sort of dog and what they were called. 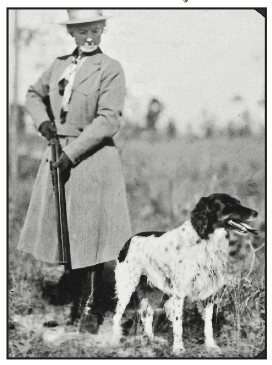 That changed in 2014, with Annie Oakley (Greenville, OH) and her beloved tri-color English Setter, Dave. Dave was like a child to Annie and her husband, Frank Butler, who was himself a traveling marksman and dog trainer. Dave worked with Annie and Frank in their performances as well as served as a hunting dog and constant companion. Upon Dave’s death in 1923, Frank wrote a little book about Dave’s life, as if it were told by the dog, “The Life of Dave, as Told By Himself.” 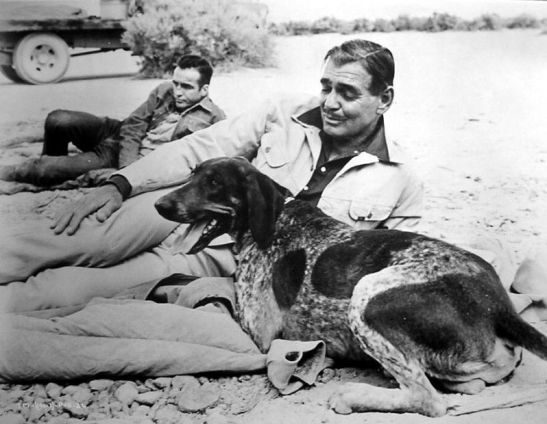 2015 featured the great screen legend Clark Gable (Akron, OH) and his bluetick hound, lounging together on the set with Montgomery Clift. Alas, this was the first year we were not able to find out the name of the famous person’s dog. Clark Gable and Carole Lombard were avid dog fanciers and had many different dogs during their lifetimes. 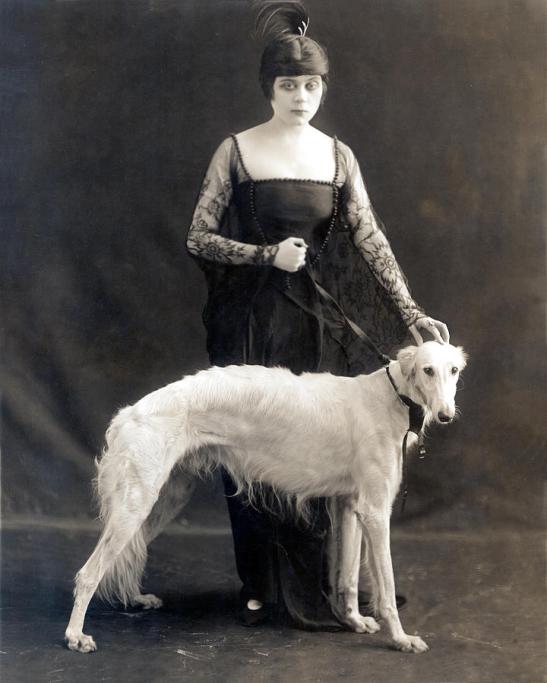 In 2016, the lovely star of silent film, Theda Bara (Cincinnati, OH) and her lovely Borzoi, Bella, will be featured on  posters, catalog, and other print materials associated with the show. Bella was so doted on by Miss Bara that she had it written into her contracts as often as possible that the dog would share her screen roles.

We really enjoy both the research that goes into finding interesting Ohio celebrities and the dogs that graced their lives— and in sharing those stories with the public and fellow exhibitors.